The aboriginal dream time is the Aboriginals understanding of the world and its creation. It was a time of ancestor beings and they came out of the earth at the beginning of creation. Time began when these beings where born. The story is the earth was flat and it was dark. Then the ancestral beings broke through the earth’s crust from below, then the sun came out of the earth’s crust and the earth received light. The beings resembled plants or where half human. They moved across the earth’s surface and fought with each other and that then changed the form of the land. They created mountains, rivers, trees, waterholes, plains and sand hills. They then made people themselves who are now the descendants of the dream time ancestors. 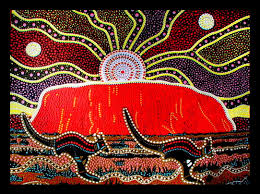